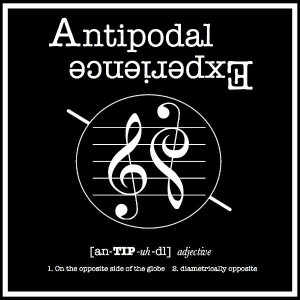 What is the Antipodal Experience?

That’s a great question – especially because one of the Dave’s had no idea what Antipodal was until the other Dave mentioned it.

The Antipodal Experience is the musical brainchild of Dave Rumsey & Dave Plemons, also known as Dave Squared. The Dave’s have been writing music together since they became close friends in high school.

They both have separately been involved in various music ventures over the years. If you’d like to learn more, just search for their names online. It won’t take you long to dig something up.

What’s unique about this project is that Dave Plemons lives in the United States and Dave Rumsey lives in Australia. You’re beginning to catch the meaning of the name, right? In the future the Dave’s will post their work flow and explain how 2 guys on opposite sides of the world write music together.

The Antipodal Experience was birthed because both of the Dave’s decided that it would be fun to start writing music together again. After a long hiatus of not collaborating musically a lot of melodies began lying dormant on various hard drives. It was time to drag them out and explore the possibilities.

This particular music venture is really about writing music for motion. It’s not music you sing to, but rather music that moves you as you’re reading, driving, writing, loving, etc… It’s about providing a musical landscape or backdrop that adds an extra dimension to whatever you happen to be doing. Think of it as your movie soundtrack (minus the Hollywood budget and actors). It’s your movie, your story, and we’re thrilled to provide the notes as you live and write your epic narrative.

Thanks for bringing us along!